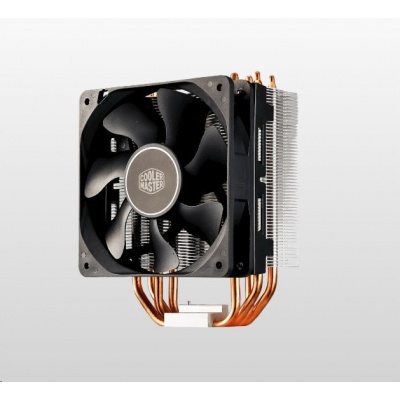 The latest in the extremely popular Hyper 212 series, Cooler Master’s Hyper 212X is based on the same patented CDC Quad heatpipe array as the 212 EVO but features several improvements that boost performance and further reduce noise. Thanks to our brand new Smart Engine and POM bearing, the 212X is incredibly durable and will virtually last a lifetime.

X-VENTS DESIGN
Positioned in a 45 degree angle and surrounding the heatpipe, each fin-blade features X-shaped vents that create areas of high and low air pressure, resulting in several controlled vortices. These small and chaotic turbulences produce strong gusts that reduce overall airflow but improve airflow where it matters the most – next to the heatpipes.

OPTIMIZED FIN DESIGN
Aluminum Fin Array with Tunnel Effect layout creates micro vortices that boost the airflow and circulate it around the heatpipes.

SUPPORTS ALL CURRENT CPU SOCKETS
Fast and easy to install and extremely reliable, our famous X-Bracket mounting system is compatible with all current sockets.