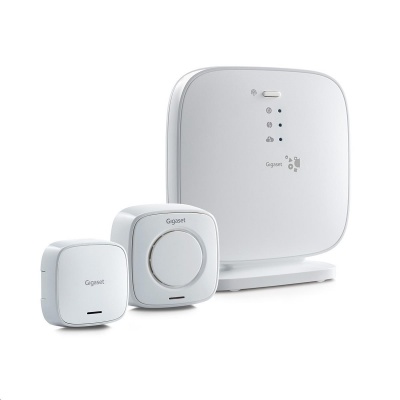 Protect your entrance area with a door sensor. It detects the door opening immediately. The system sounds a siren if it suspects an intruder.

Monitors the entrance area for uninvited guests
The door sensor sounds an alarm if it suspects an intruder
The siren in the plug produces a loud, dissuasive alarm (100 dB)
Switch modes (home/away) easily with the app
Package contains: 1 base station, 1 door sensor, 1 siren

With the Gigaset security pack, your home is never unguarded even when you are on holiday or in the office. If an intruder attempts to tamper with your door, they will be detected. The door sensor notifies you of the attempted break-in on your smartphone while the Gigaset siren deters the intruder with a 100 dB alarm. All of the information is compiled in the heart of the solution, the base station, and can be viewed in the app any time, anywhere.

The Gigaset security pack can now be used with Amazon Alexa. Control your smart home easily and conveniently using your voice via your Amazon Echo or Amazon Echo Dot. A single sentence is all it takes to activate the alarm system or set the alarm system to night mode. This will improve both the security and comfort of your home.

The sudden light can deter intruders. It is quick and easy to link the Gigaset security pack to the Philips Hue smart lighting system. If the system suspects an intruder, all Philips Hue lights are turned on automatically.

The individual components of the Gigaset security pack

Intruders? The siren will sound the alarm.
If a burglary is suspected, a 100-decibel alarm is sounded as a deterrent; you can switch off the alarm from your smartphone app. The siren is simply plugged into an electrical socket and connected wirelessly to your base station.